The primary purpose of these lectures is didactic. They show the development of the ECB intervention from 2008 to 2015 taking the evolution of the consolidated balance sheet of the Eurosystem as reference point. They endorse the theory of endogenous money as theoretical landmark.

Rilancio un post dell'ottimo Ramanan (un ottimo blogger indiano, postkeynesiano ed esperto di finanza) sul dibattito con Lavoie sulla natura della crisi Europea.
"I echo Sergio’s example (on Calabria) with a similar example of my own. If nations in a monetary union cannot face a balance-of-payments crisis, why not have the whole world join the Euro Area and adopt the Euro as their currency and have the ECB as the central bank of the world and guarantee all government debts without any condition? Surely, that should be the solution to the problems of the world! Not! ...The ECB alone cannot resolve the crisis. "
Qui il post completo.


Nakedkeynesianism ha pubblicato questa ulteriore nota sulla discussione con Marc Lavoie, che spero non mi citi in tribunale per stolking. Ma Marc è una persona amabile.
Unlimited Targets? Some pointers
Sergio Cesaratto
In this short note I will not add anything of substantial to the debate with Marc Lavoie on the nature of the Eurozone (EZ) crisis in view of Target 2 (T2). Readers have numerous papers to look at (including Lavoie 2015a/b,  Cesaratto 2013, 2015a/b) and posts (Vernengo 2015, Ramanan, 2015a/b). Links in the references. However, although most of relevance has already  been said, there is perhaps still some space for few qualifications.
Continua a leggere...»

by Ramanan on 14 September 2015
This is a continuation of the post from the end of 2014, although reading that isn’t necessary.
In a new paper, Marc Lavoie continues his debate with Sergio Cesaratto on whether the Euro Area crisis is a balance-of-payments crisis or not.

Abstract
A number of economists holding Keynesian or pragmatic monetarist views warned that political union was a necessary premise for a viable monetary union. Inspired by Goodhart, we name this the Cartalist view. The European currency union was, however, strongly influenced by New Classical Macroeconomics, which gave new strength to older traditions, like ordoliberalism, that back separation of monetary and fiscal policy, legitimizing a Stateless currency. Again like Goodhart, we call this the Metallist view. This distinction is particularly relevant for assessing two alternative perspectives of the nature of the Euro area crisis. On one hand, there are those who argue that the crisis is akin to a traditional balance of payment crisis of the kind typically occurring in fixed exchange rate regimes. On the other, there are those who attribute the crisis to obstacles to more resolute intervention by the European Central Bank (ECB). Accordingly, belated intervention by the ECB led to worsening of the fiscal crisis of peripheral Euro area states, subsequently exacerbated by austerity policies. In this view, a classical balance of payment crisis can be excluded as a cause of the crisis, because Target 2, a payment mechanism analogous to Keynes’s International Clearing Union, protects the Euro area. In this paper, I argue that although a balance of payments crisis cannot exist in a viable sovereign monetary union, it is still conceivable in a flawed, stateless monetary union like the Euro zone, possibly obscured by Target 2. In this regard, I also show that, while timely and resolute ECB intervention would have been appropriate, in the absence of federal institutions (particularly a federal budget controlled by a European democratic parliament), once this intervention finally took place, austerity measures necessarily accompanied it to check moral hazard possibilities of peripheral member countries. I argue that the German neo-mercantilist orientation and the influence of the predominant mainstream credo that monetary policy should be detached from politics and fiscal policy are obstacles to a viable federal union. I also warn about the risk that the Parliament of such a union would be divided according to national rather than ideological/class interests. Virtue out of necessity, Hayek pointed out long-ago that a currency union among different nation-States could only survive with a minimalist federal State.

In the 5th of July 2015 the huge majority of the Greek people (61%) rejected the insolent demands of the EU for the extension and deepening of the austerity and pro-capital restructuring policies in Greece. These demands were codified in the so-called Juncker Plan for Greece that set barbaric terms for the extension of the previous austerity program (the 2nd Economic Adjustment Program for Greece) in exchange for releasing much delayed tranches of the troika loans to Greece. These tranches were urgently needed for repaying instalments of previous loans by the troika. As I have argued in a previous note (‘The Greek referendum and the tasks of the Left’) SYRIZA was led unwillingly to call this referendum because of the failure of its unrealistic program for a ‘decent compromise’ with the EU and for ‘staying in the Eurozone at any cost’. Moreover, the whole affair proved beyond any doubt that EU is a capitalist and imperialist integration that cannot be reformed towards serving peoples’ needs. 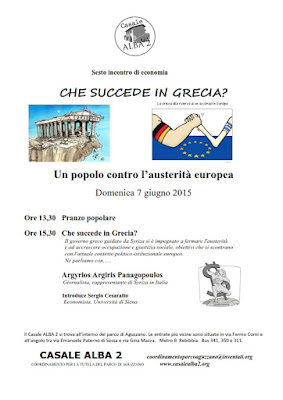 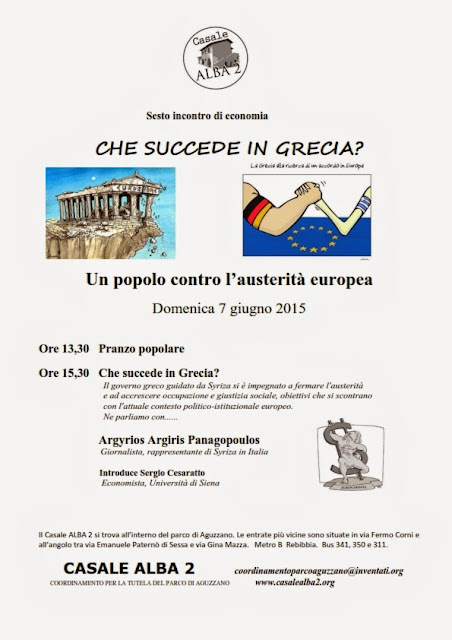