by Ramanan on 14 September 2015
This is a continuation of the post from the end of 2014, although reading that isn’t necessary.
In a new paper, Marc Lavoie continues his debate with Sergio Cesaratto on whether the Euro Area crisis is a balance-of-payments crisis or not.

For the sake of completeness, here’s the list of papers, with references copy-pasted from Marc’s latest paper. Not all links are final versions and some may not be available to read in full).
As mentioned in my part 1, referred to on top of this post, I agree with Sergio Cesaratto. 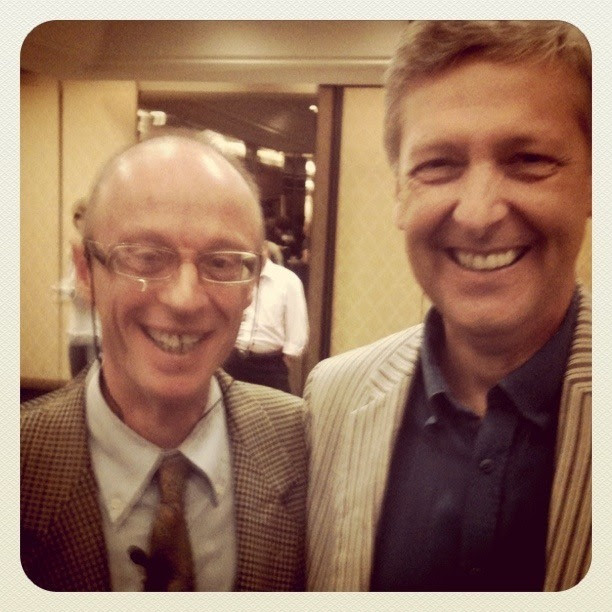 Sergio Cesaratto with Marc Lavoie (picture credit: Matias Vernengo)
Marc Lavoie’s main point in the final paper seems to be that, “Eurozone countries can never run out of TARGET2 balances, which can take unlimited negative values, so that the evolution of the balance of payments cannot be the source of the crisis”.
This is not accurate in my view. Although the rules of the Eurosystem allow unlimited and uncollateralized credit facility between the Euro Area NCBs and the ECB, one has to look at the counterpart to the T2 imbalances. If an economic unit transfers funds across border from country A to country B, this first results in a reduction of balances of banks in country A at their NCB and may result in an intraday overdraft (“daylight overdraft” in U.S. language), usage of the marginal lending facility with the NCB, an MRO, or an LTRO and finally ELA in late stages of a crisis (if capital outflow is large).
Marc himself mentions this point in his latest paper:


If a Eurozone country is running a current account deficit that banks from other Eurozone members decline to finance, or if it is subjected to capital outflows, then all that happens is that the national central bank of that country will be accumulating TARGET2 debit balances at the ECB. There is no legal limit to these debit balances. The national central bank with the debit balances, which pay interest at the target interest rate, has as a counterpart in its assets the advances that it must make to its national commercial banks at that same target interest rate. And the commercial banks can obtain central bank advances as long as they show proper collateral. Why would the size of current account deficits or TARGET2 debit balances worry speculators? There might be a problem with the quality of the loans that have been granted by the banks, or with the size of the government debt, but that as such has nothing directly to do with a balance-of-payments problem.
[italics: mine]

But that is the case! It’s because of balance-of-payments. Nations who had high indebtedness to the rest of the Euro Area saw more capital flight. This is because in times of crisis, there is a home bias and international investors are likely to sell securities abroad and repatriate funds home. Large current account imbalances lead to a large negative net international investment position. (It’s of course also true that revaluations are important, and this is what happened in the case of Ireland). So when non-residents sell securities to domestic investors, banks are likely to get into a bad situation because they have to accommodate these transfer of funds and are losing central bank balances on a large scale.
It is precisely nations which had worse net international investment positions which were affected as charted in my previous post on this.
Now moving on to definitions: what is a balance-of-payments problem? The simplest definition is the problem for residents in obtaining finance from non-residents. Greece precisely has been struggling to obtain funds from non-residents.
So I do not agree with Marc’s view that:


Cesaratto, as others, is adamant that the Eurozone crisis is a balance-of-payments crisis, whereas I believe, as others do, that this is a side issue.

Marc Lavoie also says that the people arguing for this view are implicitly assuming some kind of “excess saving” view on all this:


In discussions with colleagues who support a “current account deficit” view of the Eurozone crisis, I sometimes get the impression that they are also endorsing a kind of “excess saving” view of the economy. They tell me that current accounts deficits are unsustainable within the Eurozone because the core Eurozone countries will refuse to lend to the periphery and will thus prevent these countries from financing economic activity. This seems wrong to me.

I disagree with this. It’s precisely because residents’ liabilities are large compared to their financial assets that they have to rely on non-residents/foreigners. And during the crisis a lot of capital outflow has happened and this precisely shows that non-resident private investors are unwilling to lend again on the same scale as before. This obviously means that to obtain finance, governments of nations affected have to take the help of the official sector abroad, such as from governments, the ECB and the IMF. If TARGET2 alone could do the trick, is the Greek government foolish to go abroad?
It is of course true that the design of the Euro Area was faulty. But that still leaves open the question about why Germany is not facing a crisis as severe as Greece. The design view cannot explain this. Any country (or all countries) in the Euro Area could have faced a crisis. There is a pattern here and that is where balance-of-payments comes in.
This debate is an interesting one. Both Sergio Cesaratto and Marc Lavoie agree on almost everything, except this BIG thing.
Of course this also spills over to policy proposals. Marc Lavoie believes that the European Central Bank can guarantee that all nations can have independent fiscal policies (by promising to buy all government debt which the financial markets isn’t interested in purchasing). Sergio Cesaratto is clear on this (and I agree very much) – in another paper Alternative Interpretation of a Stateless Currency Crisis:


A more resolute role of the ECB as lender of last resort accompanied by fine-tuned expansionary fiscal policies can only be imagined in a different political and institutional framework, quite close to that of a political union.

Let’s consider what happens if there is no federal government and if the ECB is the main supranational authority (ignoring other supranational institutions which have limited powers). Suppose the ECB were to guarantee the debt of governments of all Euro Area nations. There’s nothing to prevent, say, the government of Finland to increase the compensation of its employees every year by a huge percentage and thereby affecting Finnish corporations’ compensation of its employees. This will result in a reduction of competitiveness of Finnish producers and Finnish resident economic units will rely more on goods and services produced abroad. This will raise Finland’s net indebtedness to the rest of the Euro Area and the world. If someone believes that this debt is not a problem, how about the inflationary impact of this rise in demand on the rest of the Euro Area?
So the solution lies in bringing down the balance-of-payments imbalances (both negative and positive ones such as that of Germany). This requires a supranational institution, which is a central government. National governments would have rules on their budgets but the central government — since its goals and objectives are different — wouldn’t be bound by any rules. Wage rises would need to be coordinated. And as I argue in this post, fiscal transfers also plays a role of keeping imbalances in check.
Of course there are many other economists who also argue that the Euro Area problem is a balance-of-payments problem, but with a different motive. Their argument is to blame the nations in crisis instead of taking a humanist approach.
To summarize, the Euro Area problem wouldn’t have been a balance-of-payments problem had the official sector promised to act as a lender of the last resort to national Euro Area governments without any condition. As long as there are conditions, it is a balance-of-payments problem. One cannot pretend that the European Central Bank has or can be given such powers to lend without any condition. And hence the Euro Area crisis is a balance-of-payments problem.