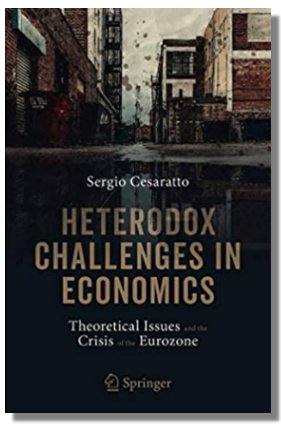 To be honest, I have read Heterodox Challenges in Economics starting from the end. I was looking forward to the English adaptation of Sei Lezioni di Economia (2019) to understand why Italian left-wing economists are so critical of the European Monetary Union (EMU). Cesaratto’s opinion was especially of interest to me because our intellectual backgrounds have some common roots. So, I decided to start with chapters 6 and 7 that examine the failure of the Italian economy after the EMU. The emphasis he lays on monetary and international issues led me to chapter 5. And this to chapters 2, 3, and 4, where he explores the theoretical foundations of the role of money and monetary policies.

The fall in Italian GDP growth is the best proof of the failure of the EMU, at least in Italy. Before 1970, the Italian economy stood on two legs: exports and domestic demand driven by rising wages and expansionary fiscal and monetary policies. A steady depreciation of the lira checked the inflation predicted by the Phillips curve. From 1970 to 1993, the average growth rate fell to 3%, an acceptable figure if we considered the international crises of the period. More worrying is the 2.4 growth from 1993 to 2007, when most advanced economies were booming. And the negative rate from 2008 to 2015 (-1,4%). Three are the villains responsible for this Italian economic fiasco:

Chapter 5 examines the intricacies of money, of “endogenous credit-money” to be more precise. Is credit-money the cause of the Eurozone’s problems, or is it part of the solution? The post-Keynesian Chartalist school (after R. Wray) presents two radical tenets

Cesaratto disagrees.Credit-money is created by the banks operating in the Eurozone, not by a political entity. However, they face an important balance-constraint that may damageGovernment finances. Only the US is free from bankruptcy due to the dollar’s status (it is the international reserve). The foreign constraints faced by the remaining countries make unsustainable a credit-driven system reinforced by expansionary fiscal policies. The resulting current account deficits imply a transfer of Euro reserves to the banks of the net-lending countries (Germany, in particular). The mere possibility that Italy and other southern countries decided (or were forced) to leave the Euro raised the interest spreads. Such was the prevailing mood in the EMU until Mario Draghi announced in May 2012 that the ECB would do “whatever it takes” to preserve the monetary union. The markets understood that the ECB would warrant the solvency of banks and the purchase of sovereign bonds at a minimum interest rate. The mere announcement was enough to reassure the markets. It was also the foundation of the “Quantitative Easing” (QE) implemented in the EMU after 2014.

The architecture of the EMU and its monetary policies are based on the marginalist ideas prevailing after 1870. Cesaratto’s analysis and proposals are inspired by a synthesis of Keynesian economics and the Classical-Marxian surplus approach conveniently updated by P. Sraffa in 1960. Chapters 2, 3, and 4 set up the building blocks of the competing theoretical approaches. Keynes highlights the problems of insufficient effective demand, liquidity preference, mercantilist temptations, and so on. Sraffa criticizes the marginalist derivation of well-behaved (downward sloping) demand functions for capital and labour. There is neither a wage that ensures a macroeconomic equilibrium close to full employment nor a natural rate of interest that ensures the investment of the savings corresponding to full employment income.

Sergio Cesaratto analyses the intricacies of the EMU (and modern monetary systems) with rigor, clarity, and enthusiasm. The reader will be immersed in the story from the first chapter. The didactical talent of the author is enhanced by the dialogue he maintains with a virtual student (the reader) who detects possible contradictions and asks for clarification of the most obscure points. It is an ambitious book that mixes theory and empirical evidence, institutions and people, technicalities, and politics.

It is a daring book reflecting commitment to his left-wing political-ideological position. The author is free to adopt such a stance, provided he is aware of the challenges it involves. The first challenge has been successfully overcome: his defence of left-wing policies is not based on ideology or personal opinions but on rigorous analysis within sound theoretical models. The second challenge is to avoid establishing a unique relationship between theoretical models and ideologies. Two examples demonstrate that this is not always correct. Leon Walras was a socialist. Keynes was a member of the British Liberal Party and rejected the invitations of the Labour Party to join them. Perhaps, in the economic realm, the traditional political antagonism “left / right” should be replaced by “up-down / down-up”. Many economists (including Keynes and me) prefer an economic system driven from the bottom up, i.e. taking advantage of the private initiative spurred on by competition. The third challenge is to discuss unfavourable evidence and criticisms. The author highlights the social costs imposed on Greece in 2010. However, the majority of Greeks recognize that the fate of their Turkish neighbours in 2010 and 2021 was much worse. Due to the increasing debt and inflation, the Turkish lira lost all its credibility and usefulness. And, what about the moral-hazard problems generated by a monetary system where the rescue of banks and governments are not an exception but the rule?

I consider the EMU to be a proper harbour in our increasingly financialized and globalized economy. I have not changed my opinion despite the crises and mistakes. Yet, after reading Heterodox Challenges in Economics, I admit the need to fix the vaulting arches linking fiscal and monetary policy in the EMU. Hopefully, the reader of Cesaratto’s book will pleasantly learn as much as me.