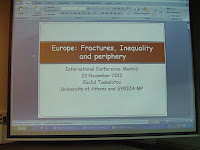 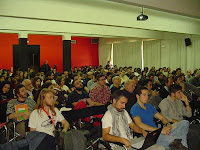 
PIGS in Madrid
Sergio Cesaratto
Cesaratto@unisi.it
Dear students and colleagues, ladies and gentlemen, companeros y companeras (if I am allowed to say so),

I wish first of all to thank the organisers and the supporters of this event.[1] I believe this is a beautiful opportunity to work side by side with the young people who are fighting against the present state of things and the critical economists. This is not a conference against Europe, or of one part of Europe against the other. As people of “troubled Europe” we feel perhaps more concerned than the majority of our northern fellows. But I think that the message of this meeting should arrive especially at your young northern fellows not just asking for solidarity (a word that I personally look suspiciously at), but because the dismantlement of the social rights in our countries might be the premise to the reduction in their own. I believe that they would defend the idea of their countries being part of a peaceful and prosper continent, and be outraged by the idea of their countries as islands in the midst of deprivation and resentment. I also believe that  youth is the time of hope and generosity, the time in which the outrage for social injustice is felt the most. So I hope that our messages, the messages from the young people here, will arrive at the most sensible ears of northern Europe, those of the young people there (let us not forget here the young socialists massacred by the crazy Nazi guy  in Norway). It is particularly important that, through any possible channel, more information about the situation in our countries be directed at the likely victims of disinformation, be they youths of Germany, Austria, the Netherlands etc,. We should take some initiative in this direction.