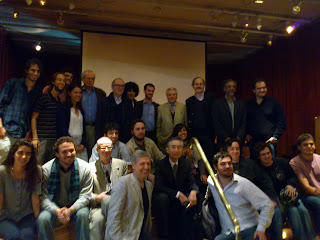 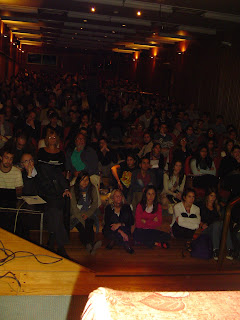 di Matias Vernengo
A very nice debate on the nature of heterodox economics took place yesterday in a heterodox conference in Buenos Aires. Sergio Cesaratto and Marc Lavoie (depicted above during the interval) presented alternative views which, in spite of some important differences, agreed that Sraffian economics is part of the broadly defined heterodox Keynesian camp (or Post Keynesian if one prefers the term). The question of the relation of Sraffians, and more broadly all of those that believe in the importance of the old classical political economy school (from Petty to Marx, including Quesnay, Smith and Ricardo), with non neoclassical Keynesians, that is, those that believe that unemployment does not result from some rigidity or imperfection (be that of the price, wage or interest rate), has been difficult to say the least.

Marc presented first. A version of the paper is here. Taking aside obvious confusions, and sloppy scholarship of the type that suggests that Sraffians accept Say’s Law, because in the determination of normal prices quantities are taken as given (the fact that those quantities are determined by demand in accumulation theory is, apparently, not understood by these critics), the main line of critique of Sraffians comes from what Marc refers to as Post Keynesian methodologists. For him, “the influence of methodologists ... felt through the study group around Tony Lawson at Cambridge ... that [argues that] proper economics should be based on critical or transcendental realism and ‘open’ systems” and that has led to an “‘open systems’ criterion to judge whether a model can be given a post-Keynesian stamp of approval” (Lavoie, pp. 6-7).

Marc correctly dismisses this supposition that from a methodological point of view the Sraffian approach is limited to closed models. As he clearly notes the Sraffian price equations require that one distributive variable (real wages or rate of profits) are determined exogenously outside of the system by historical and institutional circumstances, which by definition makes it an open system, that is, one in which there is an exchange with its environment. Marc, in fact, suggests that the strong case for a Sraffian-Keynesian interaction is based on the fact that the determination of the rate of profit by the exogenous short term rate of interest set by the central bank provides an obvious link to Post Keynesian endogenous money literature (Pivetti and Panico’s work in that area, among others, shows that Sraffians do have a lot to say about money too, by the way).

Marc notes that the main reason, however, why Post Keynesians reject the Sraffian approach is there is “little enthusiasm for any notion of long-period ‘prices of production’ as centers of gravity towards which short-period or market prices are supposed to tend” (p. 14). However, as Marc suggests there is little difference between prices of production and full cost pricing. Full cost pricing, in my view, should be connected to the Oxford Economists Research Group (particularly P.W.S. Andrews, a tradition that through Andrews’s disciple Wynne Godley influenced Cambridge Keynesians). In other words, I see full cost pricing as equivalent to the normal prices in Sraffa, both being determined by a mark up, which represents the social conflicts that allow one class to subtract surplus from another, over costs, which are determined by the technical conditions of production.

My main disagreement with Marc’s exposition, then, is related to his argument that “if one wishes to connect Sraffian economics with the other strands of post-Keynesian economics, one needs to examine production prices in a different light, not as long-run or long-period centers of gravity to which market prices tend” (p. 15). This is also complicated by the incorrect notion that gravitation requires the use of marginalist principles in order to obtain that market prices converge to normal long term prices, which is not the case [I’ll leave the details of that for another post though]. It seems to me that Marc believes somehow that full cost prices are somehow not fully adjusted prices, and that firms do not use their normal costs rather than their short run costs when computing prices.

Sergio counter presentation (not available, but you can check some of his extensive publications here), was narrower in scope, and dealt with the difference between certain Post Keynesian growth models (in particular the so-called Neo Kaleckian school) and Sraffians (he also distinguished among certain Sraffian groups). I should note that Cesaratto agreed with Marc in his rejection of the critique of the so-called Post Keynesian methodologists, and suggested that their lack of understanding of the capital debates and its consequences, reduces the significance of their views. He correctly points out that the capital debates produced the only occasion that forced neoclassical economics to openly recognize its flaws, and, I would add, led to a significant change in the way they do economics, forcing the change in the notion of equilibrium and the development of disaggregated intertemporal short term models (i.e. without a uniform rate of profit, something first noted by Piero Garegnani).

Sergio notes that when dealing with models of accumulation there are three features that most heterodox groups would want to incorporate in their models, namely: (A) the Classical (or in general exogenously given) income distribution, (B) the Keynesian Hypothesis of an investment rate independent from an exogenously given rate of savings, and (C) normal accumulation paths, with the traditional corollary of a long run normal degree of capacity utilisation. Between these three features one obtains what Sergio refers to as the Magical Accumulation triangle.

Neo Kaleckian (NK) models (some of Marc’s models, particularly in his Foundations of Post Keynesian Economic Analysis are of this type, but not the ones in his book with Wynne Godley) tend to assume A and B, but not C. The absence of the notion of normal (or fully adjusted) positions, as we saw above with regards to prices, is the main difference between the NKs and what Sergio calls the supermultiplier Sraffians (which have A, B and C). The supermultiplier models (which are in a sense Kaldorian, on Kaldor and Sraffa see this paper) implies that long term capacity output (not optimal in the sense of full employment) is determined by the exogenous components of demand, and investment is derived demand (as noted by Sergio the key contribution here is Franklin Serrano’s PhD thesis).

Here it is important to note why long term normal positions are important. It has little to do with a belief that economic systems are stable and tend to optimal levels, since the normal positions are tendencies, and are, generally, below full capacity, and crisis are the norm. Normal positions are important because they show that the regular functioning of capitalist economies does not produce efficient allocation of resources. Without suggesting that those that deny the relevance of long term positions are imperfectionists in the same sense that neoclassical authors that believe that an accumulation path below full employment is due to price, wage or interest rate rigidities, the argument still relies on an inability of capacity to adjust fully to the exogenous growth of the autonomous components of demand. The question then is why would a business not invest enough to keep its capacity growing in line with the growth of its demand? Here, I believe, lies the fundamental difference between classical-Keynesians (or supermultiplier Sraffians) and Neo Kaleckians.

By the way, as I noted before in the blog, the use of the term Kaleckians for the NKs is a bit of a misnomer, since the models derive really from Joan Robinson (and as noted by Sergio, Harrod and Steindl too). In part, I think, for her role in the rejection of normal positions and her views on history versus equilibrium, Sergio suggested that Robinson played a negative role in these debates.

There are several other things to discuss about this topic (the role of Joan Robinson among the important ones), brought about by the interesting, controversial, but very friendly debate between Marc Lavoie and Sergio Cesaratto which I’ll leave for other posts.
Posted by Naked Keynes at 11:48 AM